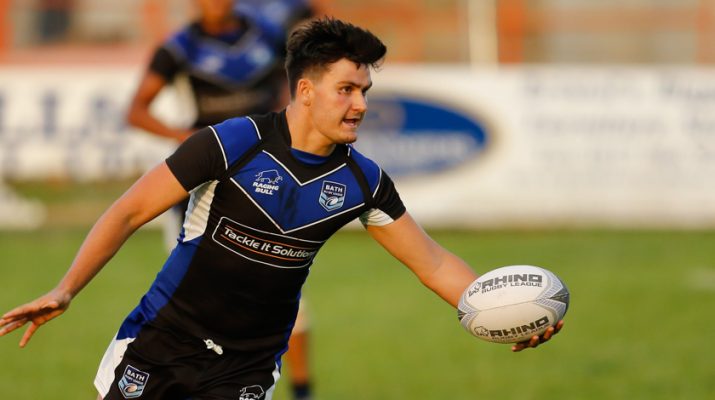 In front of a large and vocal crowd, the home side picked up their first West of England League win of the season, though they were made to work hard for it by a Bath Rugby League side who beat them in another topsy-turvy derby game earlier in the season.

Under blue skies, a blazing sun and 30 degrees of heat, the two sides put on a demonstration of committed, free-flowing Rugby League. Defence dominated the opening exchanges, before Bristol took their first opportunity to open the scoring. With the Sonics camped deep in Bath territory, the ball was thrown to scrum-half Dan Brooker, who picked out a defender and barged over from ten metres out. Player-coach Dom Swann made no mistake with the extras.

The home side continued to push forward, but Bath battled hard in response. After 15 minutes they leveled the scores when full-back Josh Frost broke free of some weak attempted tackling to cross under the posts, Louis Ayliffe adding the conversion.

This seemed to jolt the Sonics into action, and two tries in as many minutes saw them take control of the game for the first time. Once again, it was scrum-half Dan Brooker who did the damage. First, he scored an almost identical try to his first. Swann again converted. In the next set of six Brooker scored a further try, breaking through the line on half way and sprinting down the touchline to complete a hat-trick.

At this point, Bristol led 16-6 and were in command of the game. However, it wouldn’t be long before the momentum shifted in Bath’s favour and the visitors began to enjoy more possession. With a fresh wave of sizeable forwards entering the field of play from the Bench, Bath started making serious yards with ball in hand.

The pressure told on the home side, with three Bath tries in under 10 minutes changing the complexion of the game completely. A penalty for offside against Bristol on the final tackle gave Bath another set of six to attack. Loose forward Rob Fox took full advantage, bursting through to touch down beneath the posts for a try converted by Louis Ayliffe.

Three minutes later, and following a penalty on half way after Dom Swann’s kick off went dead in goal without bouncing in the field of play, Bath scored again. This time it was Louis Ayliffe crossing the whitewash with a sublime passage of interplay. He calmly converted to edge the visitors in front for the first time, 16-18.

It got worse for the home side three minutes later. When Bristol full-back Jonny Mawer spilled a high kick close to the half way line, Bath took the opportunity of a free play to put on a dazzling display of off-the-cuff rugby league. The move involved numerous offloads, a short grubber kick, and some brilliant support play. The result was a memorable try for replacement Aran Schofield, converted by second-rower Alex Burns.

Having previously looked the better of the sides, Bristol were now struggling to keep up with their opponents. Bath’s forwards ran hard, looked for offloads at every opportunity, and played a brand of rugby that caused numerous problems for Bristol’s defence.

The Sonics fashioned an opportunity to reduce the arrears before half time. This time, it was prop forward Byron Edwards who picked out a weak link in Bath’s defence and forced his way over from close range. Swann’s conversion made it 22-24 at the interval and all to play for.

Bath started the second period with some strong momentum. After 48 minutes they extended their lead to eight points via a try from centre Shai Bonnick, converted by Alex Burns. Soon the Sonics were back in the ascendency, though. After 53 minutes and with Bristol deep in Bath territory, Dom Swann put in an inch perfect grubber kick that bobbled before holding up nicely in Bath’s in-goal area. Winger Harry Brooker, won the chase to touch down. Swann couldn’t convert from the touchline, but the Sonics were now only four points behind.

The momentum was now with Bristol. Occasional gaps began to appear in Bath’s defence, allowing loose forward Lawrence Roycroft and hooker Charlie Geary to make significant breaks. While they were regularly foiled by full-back Josh Frost, they created the positions for the home side to ram home their growing advantage.

Bristol finally went in front again with 20 minutes remaining. Byron Edwards once again forced his way over from short range for a try coolly converted by Dom Swann. Five minutes later, Edwards completed his hat-trick, this time stretching out to touch the ball down with one hand. Swann once again converted, leaving the Sonics eight points up with less than 15 minutes remaining.

Bath upped their work rate and started to cause problems for Bristol once again. The home side repelled these attacks until five minutes from time, when Tom Plance broke free and touched down to the right of the posts. Surprisingly, Alex Burns couldn’t convert, leaving the Sonics with a four-point lead to defend in the closing stages.

A tense and thrilling finale followed. Possession changed hands a number of times in the final minutes. With less than a minute to go, a Bath error deep in their own half offered Bristol a chance to see out the game. Following the scrum, Sonics forwards slowly trundled the ball in, mindful that any errors could be costly. After four tackles, referee Holmes signalled for full time.

Chris Chatten, Bath Rugby League, Club Coordinator, said “This was a great game for the neutral to watch, we are playing a really good brand of Rugby League and on balance probably deserved to win the game with the creative plays we were putting on in attack and it was pleasing to see tries been scored by different players across the park.

However, defence wins games, but is was pleasing to see us defend back to back sets near our own line when we might have crumbled earlier in the season. We are improving week on week and Luke Cador was unfortunate to have his interception brought back for offside which could have been the difference on the night. The league table is still very much open with anyone capable of beating anyone on their day, it is all to play for in what is turning out to be a great season, exciting times ahead.”

A Bristol Sonics spokesperson, said: “It’s brilliant to get a win after losing a couple of very close games earlier in the year. Bath are a top side with some big forwards and talented playmakers, so to hold on for the win was very satisfying. There were some excellent performances throughout the team, so I won’t single anyone out for special praise. It was a brilliant collective effort. Now I hope we can kick on and win a fair few more games before the season’s out.”

Bath Rugby League also had a run out across the bridge in Wales at Cwmbran against Torfaen Tigers on Saturday 24th June in their second development friendly of the season.

Chris Chatten, said “Players who were keen to get more game time really benefited from the game and Dan Blake scored his first Rugby League try in his second ever game of Rugby in either code. Torfaen are a really friendly and helpful club, hopefully they will come and play us at home later in the season”

Bath Rugby League are back in West of England League action on Saturday 1st July when they take on Portsmouth Navy Seahawks at their Chippenham RFC home, kick off 2.30pm.

Portsmouth managed to beat Swindon St. George last week who have been the early season pace setters in the league so will no doubt be another tough contest with everything to play for.

The club would like to inspire people with the excitement of Rugby League and are always looking for new players, advisory board members and valuable sponsors who are interested in working in partnership with the club to develop Rugby League in the area.

Romans are marching on July 2015