Bathford A played host to Bathford B but this game didn’t go as planned for the A team. A Josh Kashdan maximum with a brace from his brother Leon – supported by Peter Mott gave the B team an unlikely win. Albert Bolhuis‘ brace wasn’t enough for the A team, supported by young William Avery couldn’t prevent his side going down 18-25 to the league leaders.

One of the most unusual Premier games was the match between Yatton Keynell A and Bath Invaders A. 5 of the six players were playing up for their A team’s. It was in fact the Invaders  who claimed a whitewash victory 30 points to 9 with a team made up entirely from their B team.

Nicholas Branch, David Busari and Matthew Currant picked up three wins each and secured the doubles in three straight sets.

In Division One Radstock A are unbeaten and just three points off top spot. They hosted their B team and were made to fight for their 25-15 win. Phil Ware secured a maximum alongside braces for Keren Millard and Chris Bennett. Mark Bennett replied with a brace of his own for the B team but Wayne Button and David Gamlin could only run their A team counter parts close in five sets in a few games.

Bitton overcame a depleted Oldfield D team 27-6, with the away team having to play up Colin Dowding. Chris Toft and Fred Martin scored three wins each whilst Julie Taylor picked up Oldfield’s only win of the night.

Batheaston A played their B team away and came away with an impressive 30-3 win to take a early lead in the Division Two table. Nigel Pedley, Peter Smith and Gary Sartain scored maximums whilst Mel Henry earned two points for the B team.

Mayfield haven’t found Division Two easy this season after coming down, but they have a draw to their name now after playing out a 17-17 contest away at Bathford D. Glen Avery and Greg Rowland landed braces for the home side and won the doubles. Reginald Morris and league newcomer, Andrew Cobb, scored braces for Mayfield, supported by Stephen Tanner.

Away vs Chippenham Dec ’15 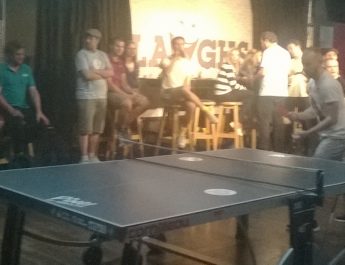