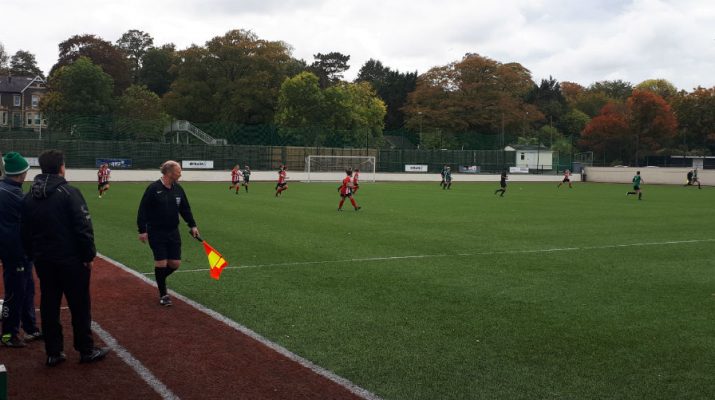 Goals, controversy, flowing football and never say die attitudes, this game had everything for the neutral fan.

The action started just four minutes in as Laura Williams was played through forcing Saints goal keeper, Hannah Haughton, to concede a corner. Haughton elected to punch the corner and it comes to nothing. However Keynsham were soon 1-0 up two minutes later.

Kerry Bartlett was assisted by Justine Lorton with a neat touch to control the ball, which wrong foots her marker. Kerry’s second touch was a well placed finish into the bottom corner.

The woodwork has not Keynsham’s friend for ninety minutes and Williams was the first to rattle the cross bar, on nine minutes. Lorton pounced on the rebound but her shot was blocked and Bartlett blazes over the loose ball. The goal frame was moving again just three minutes later after Bartlett played a neat one two with Lorton but her effort hits the post.

Scores were level with the Saints first real chance of the game. Alisha Buckingham managed to get in a free header from a Krystal Whyte corner on nineteen minutes after Keynsham opted for zonal marking.

Two minutes later the game could have swung into the away side’s favour.

The Saints were coming back into the game now and some quick thinking in the middle of the park released Emma Eldridge. Keynsham’s keeper, Charlotte Haynes, came a long way out of her area to meet the right winger. Eldridge managed to touch the ball past Haynes after sprinting past the Keynsham defence but was taken out by the on rushing Haynes.

Nine times out of ten this would have been a red card but thankfully for the home faithful, after much deliberation with the linesman, a yellow card was produced for the Keynsham shot stopper.

Keynsham really began to assert their dominance on the game from this point on and chances came thick and fast towards the end of the half.

Rachel Cullen played through Williams who takes a touch on the left and delivers a pin point cross for Bartlett to tap home; making the score 2-1 on the thirty first minute. Just four minutes later Williams and Bartlett combine well again to create a chance for Lorton; who’s shot is just wide.

A moment later Kirsten Rendall stings Haughton’s gloves after a Williams layoff in the box. Bartlett and Williams both follow this up with efforts of their own over the next few minutes. Jade Radburn‘s long shot cannon’s off the cross bar on thirty eight minutes with the Saints defence standing off the advancing centre back.

Just before half time Keynsham do break down the Saints again to go into the break 3-1 ahead.

Williams turns provider again for Bartlett with another quality cross from the left giving the striker an easy finish. The left winger could have added a goal for herself after a deep cross eludes the Saints back line, but the on rushing Williams’ effort at the back post is well held by Haughton.

Woodwork was rattling again just five minutes into the second half. Michelle Munro unleashes a fierce drive after a short corner on the right which catches the post. Then she does it again just around a minute later again from a corner.

Keynsham’s patience pays off on fifty four minutes as Bartlett gets her fourth from the penalty spot. Hannah Davies is brought down in the area and the prolific striker steps up to send Haughton the wrong way; making it 4-1.

Houghton saves well from Lorton five minutes later to keep the Saints in the game. However the next move on the sixtieth minute saw Lorton prevail as she is played in to beat her maker with a mazy run to finish with confidence.

Around ten minutes later Houghton came out on top again. Bartlett puts in a pin point cross for Lorton but somehow the Saints shot stopper smothers the ball.

It wasn’t until the seventy fifth minute that the score became 6-1. Munro finally found the back of the net after a Lorton cross fell kindly, after hitting a defender, on the half volley for the winger to rifle home.

Keynsham didn’t have to wait too long for another goal as just three minutes later Ellie Curson got in on the action. The competitive midfielder unleashed a long range rocket that Houghton couldn’t keep out, despite getting a hand to it.

The Saint’s number one was still busy and did well to keep out Lorton again a few minutes later. Then her opposite number, Haynes, was called into action up the other end. Eldridge broke free of her marker to square the ball to Catherine Browning but Haynes was alert and got down well to hold.

Just a few minutes were left on the clock now but Haughton was still busy. Lorton was thwarted again after bursting into the box but Haughton could only parry her stop to Bartlett. The Keynsham number 9’s effort was then saved for a corner to keep the score down.

At the death Bartlett has a first time shot from a cross but it sails over. Finally Houghton comes out on top again from another one on one this time with Radburn, who played the second half in midfield.

So at full time the score was 7-1 and it could have been a lot more if it wasn’t for an inspired Houghton. Alternatively it could have been vastly different if Keynsham has went down to ten players on the twenty first minute as the Saints were finding a way into the game at that point.

Keynsham go through to the next round of the competition and face Portsmouth whilst the Saints will be back in league action.