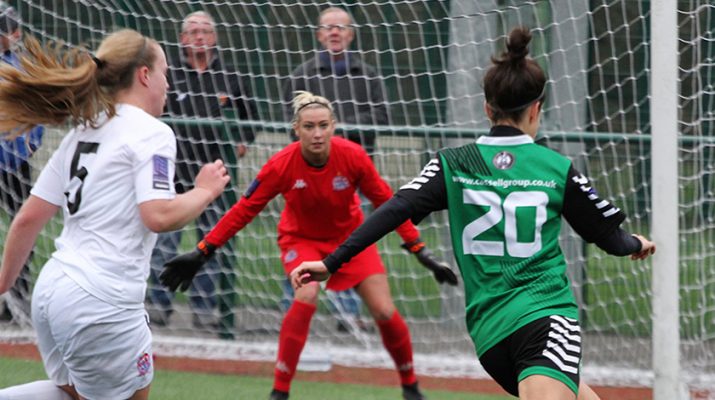 Keynsham are through to the Fourth Round of the FA Cup and are set for a trip to Reading Ladies. However Fylde ran them close in a game that produced two red cards.

Fylde went close a few times, from Danielle Young and Emily Hollinshead, inside the first five minutes as both teams start to size up their unfamiliar opposition.

It was Keynsham who came closest to opening the scoring on eight minutes though. Justine Lorton showed great technique after gambling on the bounce over the defender, but her rasping shot cannons off the bar.

Lorton caused the Fylde defence trouble again as she forces a good save from Brittany Jackson. The striker gets free of the defence and shoots across Jackson’s body but the keeper pushes it wide.

Now Keynsham were firmly on the front foot and the opener came on the thirty third minute. Lorton again timed her run to get free on the right and cuts inside her marker at the by-line. Stepping into a shooting position she spots the run of Kerry Bartlett who turns in the squared ball.

This galvanised Fylde who started to attack more. Midfielder Hollie Kelsh tested Keynsham’s keeper Charlotte Haynes and it wasn’t long until the scores were level.

A ball over to the right finds Sophie Charlton who rockets it in on the volley, giving Haynes no chance just before half time.

In the second half Keynsham came out with more attacking intent with Lorton hitting the bar again, with time with a shot from the left.

Laura Williams presented another chance for Lorton on fifty eight minutes. The winger got free of her marker and found Lorton arriving at the back post inside the six yard box, but her effort goes wide.

Throughout this game the referee was stopping play constantly with some inconsistent calls and cards.

However he was left with no choice on seventy five minutes. Bartlett challenged Jenna Carroll, flooring the pair of them, and Carroll reacted to the challenge as she got up before the Keynsham striker. The linesman flagged for this and the referee stopped play and after consulting his official produced a red card.

It look the home side just six minutes to take advantage of the extra player to make it 2-1. A long ball was played into box but Bartlett couldn’t connect. A scramble in the box followed with Kaka pouncing on the ball to slot past the keeper.

Right at the death the referee produced another red card, this time for Keynsham. Kirsten Rendall was strong in the tackle and the referee deemed it worthy of a second yellow, but there wasn’t enough time for Fylde to get back into the tie.

Keynsham can now look forward to their visit to Reading in the next round, whilst Fylde can concentrate on their league campaign. 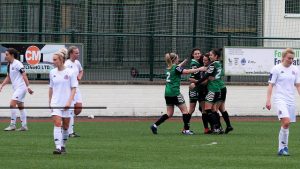 Aber set their sights on Europe