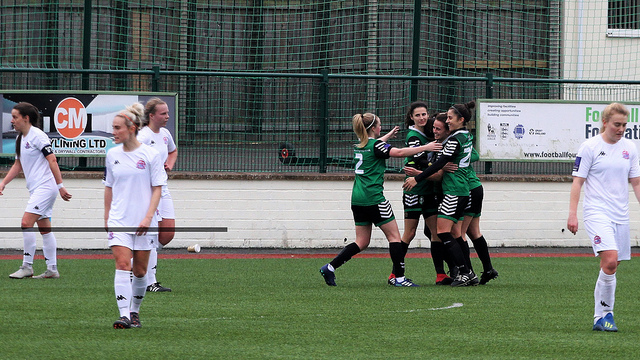 Kerry Bartlett is back at Keynsham Town LFC after resigning from Cheltenham Town LFC.

Bartlett left at the end of last season to join the ambitious Robins after helping Keynsham to promotion last year. She scored an impressive ten times in just eight games but is pleased to be back at the AJN Stadium.

On signing, Kerry commented “It feels great to be back. I know it won’t be easy in the Premier, but I’m looking forward to the challenge and playing with this group of girls again.”

The prolific scorer was Keynsham’s top scorer with a record breaking 63 goals last season. This helped Keynsham get promoted to tier three of the pyramid, the FA Women’s National League Southern Division.

However it hasn’t been plain sailing so far for veteran manager Barrie Newton.

“Barts coming back in the best news we have had all season. We have found the step up to the Premier a big one, but we are determined to retain out status and our main problem has been scoring goals.” Said Barrie coming after their last home game on the 12th January which was a 6-1 loss against Oxford United.

He is optimistic about their chances moving forward now. “We will now have a proven goal scorer up front, which will make so much difference. All of the players were excited by the news and it has given everyone a boost, as so many of them know exactly how Kerry wants the ball.”

One player that will benefit will be former England player Justine Lorton who formed a great partnership with Bartlett over the last few seasons. “It will be great to watch the Lorton-Bartlett interplay again. They were almost telepathic last season” Barrie added.

The next game for the Ladies team is against a strong Cardiff City side at the AJN Stadium on Sunday 2nd Feb, KO 2pm. They will need your support so make sure you come down and get behind the team!