Chloe Thomas is back in the UK with the Welsh Team and has taken time out of her training schedule to speak to M Tanner Sports:

1) The draw has been made and you face Antonina Szymanska, Caroline Tanska and Emma Torkington. Have you ever played any of them before?

Yes I have only played Emma Torkington but that was quite some time ago now about 3/4 years ago.

2) In a group with 3 different nationalities is it difficult to adapt to the different ways of playing?

Sometimes yes as different nationalities play in different ways such as the French loop a lot and usually the Chinese and Asian players play closer to the table and move you around more. So it can be difficult to adapt. 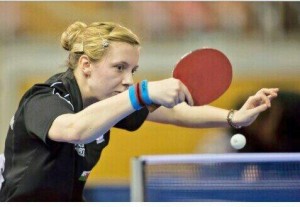 3) There is a strong Welsh presence at this tournament; does that show the strength of Welsh Table Tennis at the moment?

From the women’s point of view the welsh team is strong; we have 5 women which are all at quite a high level. We also have 3 out of 5 left handers which is very unusual to have in one team. We a have a variety of styles from smooth rubbers to short attacking pimple to a long pimple for defensive play .

4) How has the preparation for the Commonwealth Games been going? Will this be one of the last chances to play competitively?

The preparation for the Commonwealth Games has been going well. Been doing a lot of physical off the table and on the table training and also focusing on the mental side as it plays a big part in table tennis. Sussex will be the last competitive tournament I will play before the Games.

5) Finally how much does it mean to the players to have the cameras there in the latter rounds?

Thanks for answering your 5 Questions and best of luck with the Open.