The Five Questions Series is back with Liverpool GP Women’s winner Abbie Milwain. Take a watch of her thrilling final with Megan Phillips on Sunday 17th August, thanks to Table Tennis England for the coverage on their YouTube Channel:

1) Table Tennis players don’t get much coverage, you come from Derby and ranked number 10 in England, what else does the world need to know?
Well I am student at Keele University going into my 3rd year doing physiotherapy. I train at Draycott TTC

2) You managed to win the Liverpool GP against some very tough opposition, what is coming up in the next few months for you?
Next thing for me is playing for Draycott TTC in the European table tennis cup in Belgium, September 5th-7th, then Women’s British league in the winter. So lots of training for them!

3) Was that your first GP win?
Yeah it was my 1st Grand Prix win really pleased to have won the competition. 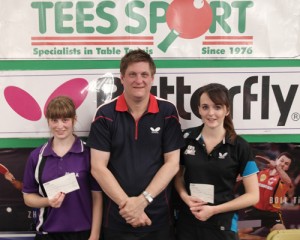 4) You might have had some time to catch some other games which players male or female impressed you?
Mostly impressed by some of the top men including Matt Ware and David McBeath; I like watching their games and how aggressive/attacking they are.

5) Will your rankings have improved due to this win and what are you aims for the winter league?
I didn’t play so well yesterday so not sure if ranking will improve. Aiming to play at least another 2 GPs before end of the year and will try to get as far as I can in these. I’m also looking forward to Belgium and testing myself against some of the International players.

Overall for the winter I want to be trying to get as high as possible on the GP end standings last year I won Band 1 but this year’s top women’s will be more important for me.

Also we’ve got a strong WBL team for Draycott so hoping to try and challenge Ormesby for the title!

Best of luck to Abbie out in Europe and for the rest of her team in the winter league. Which other table tennis players should we feature next? Get in touch with who you would like to see next, or what type of article you want to read!

A brief look at a minor sport in Britain