Bath City began their new season in Vanarama National League South with a hard fought victory over Wealdstone at a warm and sunny Twerton Park. A goal in each half from Dave Pratt and Nick McCootie proved just enough to see off the visitors in a tight and competitive match. 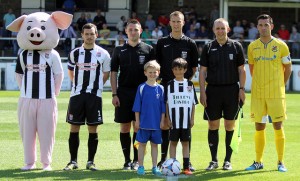 The kick off was delayed by 25 minutes due to problems encountered on the M4 Motorway by the away side, but this seemed to have little adverse effect on them as they enjoyed the better of the early exchanges. Indeed, they had three presentable chances to take the lead inside the first 10 minutes as the hosts struggled to keep possession.

Firstly, Elliott Godfrey lifted a shot over Steve Phillips’ bar from 18 yards after Andy Gallinagh’s attempted clearance had fallen invitingly at his feet, and then Phillips produced an excellent diving save to repel Connor Calcutt’s fierce shot, and Jonny Wright failed to find the target from the rebound. The third chance saw Wright burst through on goal, only for Phillips to block bravely at his feet and then recover quickly to gather the loose ball.

It was, therefore, somewhat against the run of play that City took the lead on 14 minutes. Kevin Nicholson’s free kick from 25 yards appeared to lack the power to cause alarm in the Wealdstone defence, but Pratt was first to react and cleverly steered the ball into the far corner of the net beyond the wrong-footed Jonathan North. 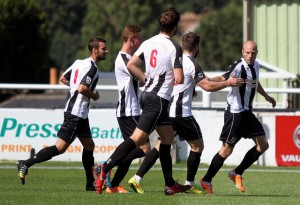 The visitors continued to hold the upper hand in terms of possession and territorial advantage, but it was Bath who created the better chances. Ashley Kington’s effort from 25 yards in the 20th minute almost hit the corner flag, but Andy Watkins should have increased the lead a minute later when he was put clear down the left by Pratt’s nicely waited pass, only to shoot straight at North.

The Stone’s stopper produced an outstanding diving save in the 26th minute to keep out Kington’s low shot from inside the box, and made another useful intervention on the half hour mark when Watkins was, once again, released by Pratt.

Wealdstone continued to play the better football and were a constant threat to the, at times, shaky home rearguard. It was no surprise, therefore, when they drew level on 36 minutes when, following a left wing corner, the ball was eventually headed into the roof of the net from close range by Wright despite Phillips’ best efforts.

It was a fully deserved equalizer, and the visitors continued to press forward for the remainder of the half, to the extent that the hosts were hugely relieved to reach the sanctuary of the dressing room with the scores still level.

Nick McCootie replaced Watkins ahead of the resumption, but the away side continued to dominate proceedings. Calcutt latched on to a ball over the top of the defence in the 47th minute but shot wastefully into Phillips’ arms, only for his blushes to be spared by an offside flag.

Luke Matthews suffered a game ending injury after 53 minutes when Calcutt caught him with a heavy challenge that cost the latter a caution. It was the first yellow card of the afternoon shown by the extremely lenient referee, Mr. Timothy Wood of Gloucester, and the young defender was necessarily replaced by the returning Matt Coupe.

Josh Hutchison found himself through on goal six minutes later, but he was denied by a superb intervention from the City keeper. Calcutt then headed over the bar from 6 yards out after meeting an enticing cross from the tricky Shaun Lucien.

Thereafter, the visitors visibly began to toil in the balmy conditions and, with Bradley Williams coming on for Chas Hemmings, City suddenly sprang into life. Jon Davies was becoming particularly influential down the left, with his direct running causing consternation, if not panic, in the Wealdstone defence.

Kington’s freekick from the left on 70 minutes found Dan Ball beyond the far post, but the centre-half could not direct his header on target and, at the other end, Elliott was narrowly wide with a volley from the edge of the box following a long throw-in.

Davies cut inside from the left in the 73rd minute and sent a rasping shot narrowly over North’s crossbar from 25 yards, and same player turned adeptly on the edge of the box three minutes later but, this time, fired well over.

City restored their advantage with nine minutes left on the clock by virtue of a slide rule through ball by Coupe. McCootie burst between two defenders, and expertly slipped his shot into the corner of the net as the outrushing North tried in vain to narrow the angle.

To their credit, Wealdstone continued to push forward in search of a second leveller, and Calcutt shot over the bar from a good position after another long throw-in had reached him.

Davies’ angled volley just cleared the Stones’ crossbar, but the pressure remained on the Bath backline. A free kick curled in from the right heralded a frantic goalmouth scramble, and there was great relief amongst the home faithful when the ball was eventually hacked away to safety. The hosts, however, were unfortunate not to register again on 88 minutes when Gallinagh’s perfect cross was met with a firm downward header from McCootie but, with North beaten, the ball bounced over the bar off the firm surface.

The final action saw Phillips comfortably gather Godfrey’s shot from 18 yards, and the victory was greeted with glee by the City supporters as Mr. Wood called time after three additional minutes.

There is no doubt that Wealdstone will feel aggrieved not to have taken something from a game that they dominated for long spells. However, City always looked dangerous going forward and, ultimately, it was their more clinical finishing and superior fitness in the latter stages that proved decisive. Injuries sustained by Matthews and Frankie Artus will be a concern, but an opening day victory means that City can go into Tuesday evening’s fixture at Basingstoke Town with confidence.