Keynsham progress to the next round of the League Plate competition after defeating a depleted Maidenhead side, who only travelled with one substitute.

The Maidenhead keeper was busy and had an early scare from Kaka but the keeper gathers the Spanish midfielder’s shot at the second attempt.

Moments later Kerry Bartlett shoots from a Kaka square ball but the keeper tips it over. Bartlett gets free again within the first ten minutes, but the keeper makes the save.

However, against the run of play, the visitors are 1-0 up. On 11 minutes Charlotte Haynes brings down Maidenhead’s number 5 (playing up front) inside the box for a penalty. Number 14 steps up to take and scores in the bottom left hand corner, giving Haynes no chance to make amends.

Keynsham are soon level just eight minutes later. A big clearance up field by Nadine Grogan frees Justine Lorton. Her first touch takes her away from the defence, with her second she shoots but the keeper saves well. However she can’t hold it and Lorton scores from the rebound.

It’s not long until the home side are 2-1 up. There is a pass back to the keeper but she waits too long on the ball, looking for options. Laura Williams challenges her and finds Bartlett to roll into an empty net.

Then with less than ten minutes left of the first half and Keynsham have a two goal lead. Williams touches down the ball in the area but number 10 (playing in defence) blocks with her hand; penalty. Kaka coolly slots the ball into the bottom right hand corner.

It took Keynsham just six minutes to increase their lead to 4-1 in the second half. Williams’ corner finds Kirsten Rendall with a free header for the tall full back, who plants it firmly past the keeper.

Maidenhead’s keeper saves well from Ellis Hillman‘s left footed effort, shortly afterwards. Then there is another good save this time from Bartlett’s free header

At the other end Keynsham almost paid for an unforced back pass as 5 forces Haynes into a save.

Keynsham were getting frustrated as Maidenhead started to play a high line with numerous offsides given. So after a succession of offsides centre back Katie Jones took it upon herself to break through the defence on a direct run, and finished with the composure of a seasoned striker.

It was soon 6-1 as Lorton follows in on a hopeful long ball and gambles. It pays off as she out paces her marker to finish past the on rushing keeper with a left footed half volley.

The victory was rounded off by Williams after heavy attacking pressure at the very end.

Direct running on the right got the ball into the congested middle. Ellie Curson gathers the ball and side steps two challenges to unleash a fierce shot, but the keeper did well to parry. However Keynsham players were waiting on the rebound and Williams slots it home.

Keynsham are at home again on Sunday 16th December against second place Southampton Women’s in what promises to be a tight affair. Maidenhead will regroup with a home game against Southampton Saints, both in the National League Div One SW 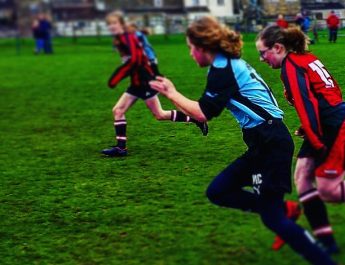