Waitrose Keynsham were too strong for Waitrose Bath with the visitors to Twerton Park coming away with a 6-2 win. The best result of the night was raising nearly £500 for the Big Bath City Bid with a crowd of around 60 people enjoying themselves. 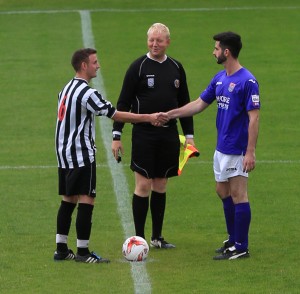 Bath started the game with strength and purpose and soon went 1-0 up. Good work on the right hand side found their winger at the byline; driving a low hard cross into the 6 yard area. The Keynsham center back tried to clear but ended up putting the ball into his own net.

Youth and pace was no match for Bath’s defence as the half wore on though and Keynsham were soon ahead. Bryn Williams scored a quick double as the passing vision of Mark West and Ryan Carreyett were finding the feet of Jamie Noble and Tom Summerhill out wide creating countless opportunities.

The half ended with Noble adding to the tally just before the break to give his Keynsham team a 3-1 lead. Bath’s keeper Mark Cullen had pulled off a number of smart saves in the first half keeping the score line down. Changes were made to both teams at half time and the game started brightly for Keynsham.

Williams grabbed a hattrick with Bath unable to clear their lines again; with West and Callum Hinder’s direct running causing Bath all sorts of problems. Summerhill then added a 5th goal for Keynsham as the winger cut inside finding the space and time to shoot into the bottom corner.

Keynsham’s center back captain, Joe Gardner, stepped up to take a freekick with 15 minutes left to play. He guided a well struck shot around the wall leaving the keeper stranded for a 6th goal. Mike Pattemore changed his Bath side and they began to press forward en masse exposing Keynsham’s back three.

They got their just rewards as Summerhill was deemed to foul in his penalty box. The penalty was duly converted, by Bath’s number 9, to give them a glimmer of hope. Bath then went close on a number of occasions in the last few minutes but the heroics of Gardner, who went in goal for the last 10 minutes, kept Bath at bay.

Steve Bradley and William Heath had a Big Bath City Bid stall at the game and everyone went away more informed about community ownership and what it will mean for the city of Bath.

Big Bath City Bid spokesperson, Steve Bradley, commented: “It was great to have players, staff and spectators from Waitrose in Bath and Keynsham making Twerton Park their home for an evening, and we’re very grateful to them for raising so much money for the Big Bath City Bid. Waitrose is famous as an employee-owned partnership, whose staff all share directly in the company’s success.

And we’re raising the funds needed to turn Bath City FC into a community-owned club, with the city of Bath benefitting from and sharing in our success. We hope that the affinity between employee-owned Waitrose and a community-owned Bath City can grow with time into a mutually positive relationship”.

Referee – James Rampton – Thanks must go to James who refereed the game free of charge and kept order well after a full day of work.

Back the Bid now, before it’s too late! Big Bath City Bid

Play on the Meadow

12th May 2014 marktanner87 Comments Off on Play on the Meadow