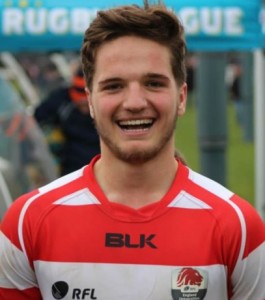 How long have you been playing rugby league?

I have grown up with rugby league, my home town (of Huddersfield) is the games birth place – so it was only natural that there was a strong rugby presence in my school and in my family. My fondest moments as a child were travelling over to Wigan to watch Giants Vs the Warriors – they are always great games and a really good night.

My dad, who taught me everything I know first bought my brothers and I a tackle bag when I was 5 years old – so the love of the game came from him (along with my grandfather and uncle) and then carried on from there. I first started playing competitively for my local side, Newsome Panthers JRFC, with my eldest brothers team when I was around 6, and I’ve been playing ever since.

Was there much chance to play it growing up?

Yes of course, everywhere I turned, especially in my family, rugby league was a massive part of our family life and culture. Huddersfield has a lot of junior sides so I joined Newsome very early on and have played in and around West Yorkshire till I was 18 years old.

Like all my peers, I’ve also played rugby union competitively, but league has always been my first sport. But it’s been nice to have played both, it gives you a good understanding of rugby as a game and it’s interesting to see how the game differs between the codes. Playing both, I hope, has made me a more rounded player.

What course are you studying for?

I’m currently in my second year of a four year course. I study Politics and International Relations with a one year placement. This year I’m trying to secure a placement in the UK or in Europe for next year so that I can gain some work experience.

What attracted you to study in Bath?

Bath is a great university and it’s sporting facilities are second to none. I remember going to some university’s open days and looking around the sports departments and not being that impressed, but when I came to Bath I was blown away. The sports training village is incredible.

I also saw an advertisement before I came about the rugby league squad and its successes and how Gavin Grant was playing for Scotland – this was a massive factor as well. Not only because of this, it is also great for academics and it suited my sporting commitments and my studying. It’s a great university and I would definitely recommend it.

Does playing for the regional squads help players get into international sides or pro clubs?

It does yes; it’s a massive stepping stone for students to showcase their abilities and skills on a stage where everyone can see. I know of three Bath lads (Jamie Park, Gavin Grant and Morgan Evans) who played internationally from the setup. There are also some other Bath lads who play for the Scorps (South Wales Scorpions RLFC) – they seem to be doing well down there.

Do you play for any clubs outside of the Uni?

At the moment I do not play for any clubs outside of university, I have been busy with exams and coursework and have not really had enough time. But next term (Jan 2016) I hope to be able to go to Bath and Wiltshire Romans, Chris Chatten the SW manager is also the manager there and some lads from Bath also play. It would be nice to be able to go down and have a run around – I just hope I don’t have too many exams!

What do you hope to do when you graduate?

At the moment I’m not really that sure, I will do whatever or go whether I get a graduate job. However, initially I’d like to go travelling with my girlfriend (Amrita) and see which countries appeal to us.

If I’m lucky enough I’d like to get a graduate job, when I come back, for a large business or an international bank. We will just have to see. At the moment I will just concentrate on my degree and placement.

If you could do one thing to improve coverage of the sport what would it be?

I think rugby league has improved its coverage two fold in recent years. But there has to be a focus on the next generation from the big bosses, they have to target the youth game and get as many people interested in it as possible.

The tickets need to be affordable and things like SW and the University game through BUCS will benefit rugby league. I’d also like to see the game target London, I went to the Eng Vs NZ game in the Olympic Park and that was a great day, despite the score of the game. Rugby league has to target big events and games like that in order to show it in the best possible light.

*All of the photos used in this article have been provided by the player himself. The article is intended to help promote the growth of Rugby League in the South West. So if you own the rights to these photos and want to be credited for them then please get in touch via a social media DM