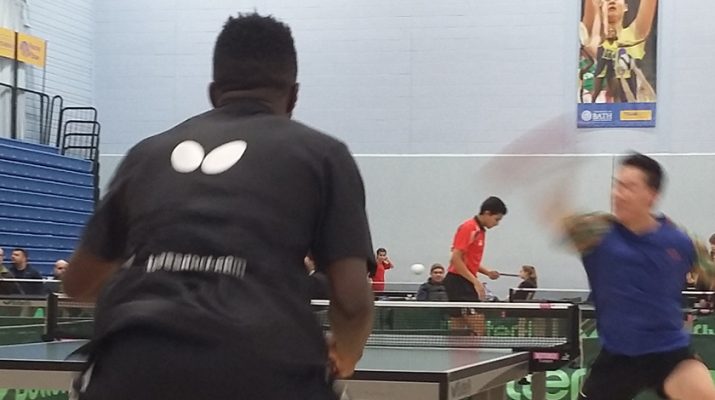 After an action packed weekend of some high level table tennis in Bath I will try and look back and pick out some highlights.

This Grand Prix was the 6th of 8 events that Table Tennis England put out for the 2016/17 season. These events are designed to attract the best table tennis players here in the UK and from further afield. However with the price of accommodation, food and travel to Bath along with the entry fees it didn’t attract as many of the best UK players as possible. Unfortunately the prizes money for the top events (men’s and women’s open) you would be hard pushed to break even on your weekend away.

Darius Knight did attend as he looked to lengthen his lead at the top of the Men’s standings overall. Chris Doran looked to be his main rival in this competition as both players started on opposite sides of the draw. Once the group stages were over Doran was made to work hard to get to the finals against some local opposition.

The vocal Pedro Lopez Laguna was his first test of the morning with the Bristol based player competing with Doran in every point. Experience and an increasing solid defence saw Dorans through 3-1 in a tight final set.

After competing in the Ping Pong World Championships, which uses hard bats, Doran grew into the tournament with those tougher games aiding him in the long run. Callum Evans and Mike O’Driscoll also gave Doran something to think about on route to the finals but towards the end of each match he found something extra in his locker to progress.

On the other side of the draw Knight looked in great form dispatching his opponents with relative ease. However in the semi finals he came up against Helshan Weerasinghe who had beaten Knight in their last competitive outing. Weerasinghe started well racing into a set lead against the tournament favourite. Knight then found some momentum winning the second set and began to serve well. The game was soon tied at 2 all after some tremendously fast paced exchanges.

However with a number of net shots going the way of Weerasinghe, Knight was getting frustrated. This set up a very attacking final set with neither player wanting to give an inch on their serves. It was Weerasinghe who reached 10 points first with Knight having to make up 3 points to force the match to deuce. This advantage was too much and it was Weerasinghe who would go on to face Doran; taking the last set 11-8.

Weerasinghe was on the end of two 11-8 defeats in the first two exchanges against Doran. However he kept his nerve and was forcing Doran into a more attacking game. This didn’t suit Doran and he was vocal enough to let the growing crowd know it. It couldn’t stop Weerasinghe dispatching him 11-6 in the third game. However the tournament experience that Doran had saw him through as he managed to sit back and defend to beat his young opponent 11-7 in the final set.

Expect to see Weerasinghe compete at the highest level in the next few years as he will look to break into a very strong England 4 man squad.

The women’s competition was equally as competitive as the men’s. It really was hard to know which table to watch as both opens reached the semi final stage.

My tip for the title, Yolanda King, crashed out at the semi finals stage to a determined Hannah Hicks. King was missing a lot of smashes and lost her head during the first two sets, whilst Hicks kept a steady pushing game throughout. The third set was closer but the damage was done on the scoreboard and in King’s head as Hicks progressed 11-8 in the third and final set.

At the same time Haoyu Liu played out an incredibly close semi final against Hai Qing Chau. This game went the distance and it was very hard to see who would come out on the top. Liu’s experience got her through in the end to face Hicks in the final.

Nothing could be separated in this game with both winning a game apiece in deuce. Liu won the third game 11-5 to gain a huge mental advantage over her opponent going into the fourth game. A furious exchange of shots resulted in Hicks forcing the game to deuce again and taking the match into five sets. The momentum was now with Hicks and she wouldn’t let this go and won 11-5 to claim the Bath GP title.

Controversy did sour the day somewhat for the winner as Liu and her coach demanded to see video evidence of a point in the fourth game. However due to the point being given and that the game was over this won’t impact the result as it should have been disputed at the time.

It certainly can take nothing away from a fantastic tournament for Hicks who played some incredibly steady shots throughout and responded well to the pressure of some formidable opponents.

My only other player that caught my eye as a one to watch was Edward Haskell who played some great stuff against Dorans. This tournament will give him some decent experience and stand him in good stead for the next one.

There was so much great table tennis to watch played over the two days so I will have to split this article in two. In the next I will look at our local players and how they fared in the banded events.

I would really urge more people to come along and watch, it’s a fantastic event for table tennis players and non players alike. 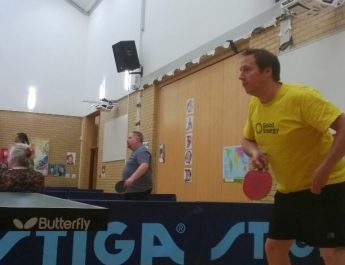