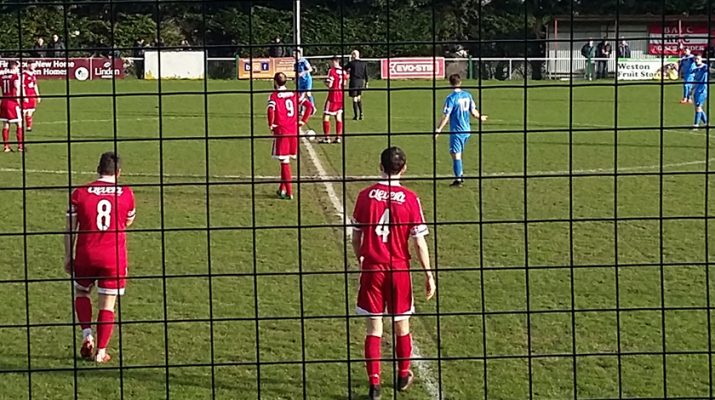 The Larks go down to a single goal in an even contest against a well organised Bideford side.

Early exchanges in the first 15 minutes or so were disjointed from both sides. The Larks were trying to find their wingers out wide in space whilst Bideford couldn’t play a telling ball into their front two. So the first decent chance for either side came on 18 minutes.

Joe Tumelty managed to find enough space for a shot but was blocked with a well timed sliding tackle. Tumelty was then found from the corner, but was free header was pushed away by Bideford’s keeper Joe Moore. The resulting corner saw debutant Matt Guy, up from the back, see his shot cleared off the line.

Soon after it was the Larks other debutant, goal keeper Shaun Semmens, turn to make a stunning save. A deep cross from the left found the experienced Chris McPhee, forcing Semmens into a one handed save from the header.

Referee Iain Parsons tried to keep on top of the game by giving out a couple of yellow cards, but this only broke up the play more and the game continued to become a stop start affair. Semmens was called upon to stop smartly again as Bideford ended the half well.

There was a flash point in the game just before half time which could have had a huge outcome on the game. Guy miskicks his clearance as he slips and ended up fouling the striker. He gets back up and clears the ball as the referee plays on. A break away chance is created for Tumelty but it is saved.

The teams go in 0-0 at half time and it is Bideford who come out with more energy and purpose. They get an early chance but then due to a lot of needless fouls the game breaks up again.

Its not until the 61st minute when the next half chance falls to Bideford; Billy Tucker heads over the bar from a cross.

The deadlock was broken on 65 minutes with Sean Downing. There was missed header from a long ball into the Larkhall box. The ball was played wide to Dan Western in space who forced a good save from the on rushing Semmens. However his save rebounded to Downing to head home.

Both teams tried to strengthen with the Larks playing a more narrow game taking off Josh Egan for striker Tom Knighton. Bideford gave another chance to teenager Will Richards, who was recently released from Exeter’s academy.

Larks top scorer Jamie Lyons was now playing more central and shoots from the edge of the box on 74 minutes. Moore was equal to it but could only push it wide but the incoming Ed Dryden smashed his shot against the angle.

Bideford began to run down the clock in the last few minutes when they found out there was four minutes added time. It was Downing though who had the last chance of the game. The midfielder was played in as he held off his marker but his one on one was well saved by Semmens in the 92nd minute.

So a hard fought victory for Bideford which would have pleased their travelling fans. They were on absolute credit to their club and with backing like that they the club will continue to climb the league. Unfortunately for Larkhall it was the same story of having strong spells in the game but not putting their chances away. One positive is that their two new signings both had solid debuts.