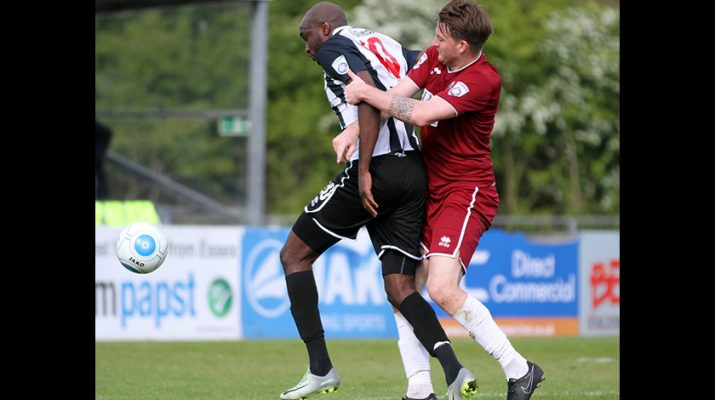 The last away game of the 2016/17 season was just my third away game this season; all of them travelling on the supporters coach.

I remember about 15 years ago when I was a teenager that you had to book in advance to get a seat on the coach and usually there was a waiting list. Yesterday though there was just 21 fans on a 48 seat coach, that’s 27 spare seats! This is a serious issue that the Bath City Supporters Club committee will have to address and report back to their members at the next AGM as this can’t continue.

Rising costs, personnel travelling and leaving times are all issues for some Bath City supporters and I urge all Bath supporters to send in your views to me as to how they can improve coach travel to away games.

Back to the day, the late buses out of Keynsham meant that I had to run up Twerton High Street to make the coach. The journey was nearly all motorway and the only bit of controversy was the driver making a mistake on his break entitlements, meaning we saw the delightful sights of two service stations.

Upon arrival to the ground we were also treated to the full sights of Chelmsford and surrounding areas as the coach driver got lost again. Ok now I’m seeing why people don’t travel on the coach anymore…

The stewards were friendly as we entered the ground as they were expecting a big crowd for this one, with Chelmsford sitting in 3rd place and the end of season awards after the game. This will be their last home game I believe as the club officials didn’t expect to have such a good season and their ground is booked out for the play off games.

I should point out that their ground is all an purpose ground with a running track around it. This would be another contributing fact why some fans wouldn’t travel, as on the sides of the pitch you are very far away from the action. However their main stand is fantastic and the small stands behind the goals are close to the action as they are on the grass (in the middle).

Their bar is great too with lots of memorabilia on the walls and different sponsorship opportunities for fans and businesses alike. It is a very new bar by the looks of it and their staff are very professional with a bar manager in a shirt and tie helping his staff out and surveying the room. This is something that Bath could do a lot better with although Chelmsford could probably do with our queuing system. Also for the ‘real ale’ drinkers out there they had two on with the Left Lion being a very nice guest ale.

‘Away days are a great day out sometimes spoilt by 90 minutes of football’ – is a common phrase used by some supporters and this one didn’t go according to plan for Gary Owers and his team.

City got off to a decent start with some good passing moves in the early exchanges. I was told by a Chelmsford fan before the game that you would lose count of the long balls they play in the first ten minutes, but Louie Theophanous chased everything down and looked a real danger going forward.

On 13 minutes it was the Romans who were in front. Marvin Morgan was released but his shot was saved by Ross Fitzsimons only for the rebound to hit Morgan which found the back of the net for his 10th goal of the season.

Chelmsford slowly began to find their feet in the game with their wingers making the most of the space out wide. This restricted the attacking threat of Nick McCootie and Andy Watkins. Morgan saw his free header from a set piece saved one handed by Fitzsimons as Chelmsford also went close with Shaun Jeffers at the other end.

The Chelmsford wingers were in full stride as the half drew to a close with Josh Hill’s effort cleared off the line. Michael Spillane made the break through for the home side on 42 minutes as the midfielder pounced on Axel Andresson’s mistake as the young Icelandic Under 21 international mistimed his header. Spillane then found himself one on one with Max O’Leary and finished well.

So the score was 1-1 at half time and a fair enough reflection on the game but if the game was to continue in the same fashion then Chelmsford would have a strong second half.

The chances in the second half opening period were few and far between. Both teams tactics were cancelling each other out but with Chelmsford creating more in the final third as McCootie and Watkins were defending more in their own half. However the presence of Morgan up front kept the back four busy when City were attacking with Frankie Artus and Billy Murphy both working hard in the middle of the pitch.

Advantage went to the home side on 59 minutes as Theophanous struck from the left hand side only for Andresson to try and block the cross but it ended up in the back of the net. City hit the post immediately after the restart as McCootie forced his way past his marker on the right with Fitzsimons gathering the rebound.

The real turning point of the game came from some of the worst refereeing you will see at Conference level football. Morgan was played through out pacing Spillane to get to the ball for a one on one but the midfielder pulled him down for a stonewall penalty. Amazing the referee waved play on and linesman seemed to have his eyes closed for most of the half with the sun coming down low over one side of the ground.

Fitzsimons gathered and sent a long ball up field falling to Chas Hemmings, playing at centre back, who controlled it but then turned and slipped trying to out do Theophanous. The striker raced free from the half way line to round O’Leary to roll the ball into an empty net. 3-1.

So to recap there should have been a Bath City penalty with a red card for Spillane being the last man and Chelmsford would have to play for 20 minutes with ten men; whilst the score was 2-1 with Axel to take the spot kick. I would have fancied the game to finish 2-2 at the very least with City having a real chance to snatching all 3 points. Anyway…

Spillane certainly had an eventful game as his saw red twice in the closing ten minutes. First the red mist decended as he chopped down Andy Watkins two footed in a very late challenge and the referee then showed his a straight red; meaning he will likely miss at least one of the play off games.

Shaquille Hunter was on the pitch at this point for Murphy with Nabby Diallo dropping into the middle but City couldn’t find another chance as the ten men of Chelmsford hung on.

The City players and management came over at the end of the game and clapped us but every fan, official and player were still in shock as to how we lost 3-1.

Next week is the last home game of the season and it would be fantastic to see a bumper crowd of the visit of Welling United to show our appreciation to Owers and the lads. The end of season awards are on after the game in Charlies and all supporters are welcome.

Make sure that you check out Simon Howe’s photo album of the game, this picture used in this article is one of his. Would you have given it?