Summer league is over, that weird non committal ‘training period’ has disappeared and it’s all about the winter Bath & District Table Tennis league now!

The leagues have been decided at the AGM in the summer so that the teams are settled so lets take a look at the leagues.

In the Premier League there are 12 teams competing for the top prize in Bath. Oldfield Table Tennis Club have 4 teams in the top division and can call upon players such as Alan Champneys in the A team and Martyn Le Butt in the B team after his transfer from relegated Key Centre A.

Chippenham Table Tennis Club are also set for a another strong season with two teams in the top flight. Their A team will be the tea with beat with 4 very strong players and arguably one of the league’s best player in Gary Baldwin.

Bathford Table Tennis Club also have two teams with the very talented Josh Kashdan and Leon Kashdan-Brown competing for a place in their 5 man B team.

The lively Bath Invaders along with Bitton, Radstock and Yatton Keynell make up the rest of the division.

This year there is another 12 team league with 8 individual clubs and two sets of pairs.

The rivalry will be between Key Centre A and Key Centre B after the B team were promoted from division two last season. Yatton Keynell B will be hoping to keep their C team beneath them this season as the Yatton set up gets stronger with each season.

Paul Green will be on of the players to beat in this division and his Bear Flat A team will take some beating. Bath Invaders B will be hoping to join their A team with a promotion this season. Wayne Button will also be near the top of the individual averages this season as his Radstock B team will look to have a good season.

This will be another very competitive Division with 12 teams competing for promotion.

Batheaston, Bathford, Bear Flat and Chippenham take up 8 of the places in this division, whilst Ensleigh, Oldfield, Radstock and Yatton Keynell make up the rest.

Dennis Townsend and his Batheaston A team will be looking towards the top spot this year with Lee Bailey leading the charge for Oldfield F who should be up there aswell.

There will also be new faces in this league with social players from the Monday night sessions, at St John’s School in Oldfield Park, getting their first chance for competitive table tennis. I hope you all thoroughly enjoy it!

This year sees a change to the overall points system with every set counting towards the overall score. Before there were just 10 points on offer, a win for each game as all 3 players play each other (9 points) and a doubles game at the end.

However now even if you lost a game 3-1 then the winning team gets 3 points but the losing team also gets 1. 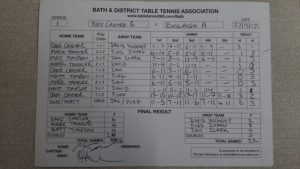 This will be vital at the business end of the season for promotions and relegations, it also makes it even more competitive in every set. A team can win 6 games 3-2 in sets only for the other team with win 4 games 3-0 causing the ‘winning team’ to actually lose on points 18 – 24.

If you would like to follow the leagues then you can on a very detailed Bath & District Table Tennis League website. You can also find individual player rankings in the league, county and country.

I’m off to improve on my 16324 national ranking, hope you enjoyed reading and see you at a table soon!