A confident Sam Walker has answered his 5 Questions and looks to the future of English Table Tennis.

1) The groups have been drawn and you’re up against Helmuth Osborne, Patrick Green and Chris Lewis. Have you played any of them before?

Yeah, I know both Helmuth and Chris. Helmuth comes down to my local club in Worksop sometimes so I’ve played him a few times before! I don’t remember playing Chris but we do know each other and he’s a nice guy, I think he’s coaching down in London now. I’m ready for the tournament and hopefully if I play my game and stay focused, I’m confident that I can top the group into the first round!

2) Paul Drinkhall and Liam Pitchford are the two favourites for the title this year, but are on opposite sides of the draw. Who are the other contenders in your opinion (apart from yourself)?

They’re definitely the favourites, English table tennis is on the rise again. Liam and Paul both prove that, Liam is around 50 in the World rankings now and Paul is recent winner of the Spanish Open and they’re tough opponents for anyone to beat. It’s a strong entry and I think any of top 15 seeds could win it on their day, but the stand out ones for me are Pattantyus and Salifou. They both have a lot of experience and different styles which makes them tough to play. 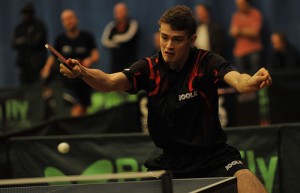 3) This tournament is all about the individual player are you looking forward to getting back to team competition with the England vs Australia match on the 20th July?

Definitely, although I’m looking forward to playing as an individual at the Heritage Oil Open to show what I can do and how I can perform. There’s a lot of exciting stuff happening for us as a team this summer which starts with that match against Australia. I believe we’ve got a great team, we have really good spirit and believe we can do anything. We’re all young and still improving which is important for the future. I think we’re all looking forward to the Commonwealths, it’s my first major games so I’m determined to perform well.

4) Which under 21 players are coming through at the moment? Are there any that will be challenging the English top ten soon?

There’s a few of the younger players that are talented and working hard. But for me Tom Jarvis has been showing some great performances recently. He’s talented and works hard, if he keeps going in the right direction he could definitely be challenging for the top 10 in the future.

5) Finally BT Sports are covering the latter stages of the tournament, will this help more people get into the sport?

I hope so, it’s great to finally get some TV coverage and from what I’ve heard BT are keen to give table tennis some publicity. It’s a great sport and one in which I think people would find interesting to watch. It’s a good chance for us as players to prove that and to try and promote the sport!

Many thanks to Sam for taking the time out to talk to us. 2014 has been a great year for him personally after breaking into the Commonwealth Games England team and competing on an international stage; he is sure to go far in this Open too!