The other half of the Phillips sisters, Angharad, has completed her 5 Questions in the build up to the Sussex Open. Angharad will be part of the Welsh team, who are improving year on year, and she is training hard for the Commonwealth Games at the end of the month.

1) The draw has been made and you are up against Agnes Le Lannic, Tressa Armitage and Hiba Feredj. Have you played any of them before?

I have played against Tressa Armitage several times, as she is a similar age to myself and I believe we started entering the various British tournaments at around the same time. Most of the matches we have played against each other have been very close so it will be interesting to see how the match pans out on the day. I have never played against Agnes Le Lannic before. One of the best things about the Sussex Open is the fact that there is a high number of foreign entries, meaning that it is a chance to play a wider variety of players than in an average British tournament.

2) Lovas, Yi and Drinkhall are the front runners for this tournament, are these the players to beat if you want to go all the way?

Of course, Lovas, Yi and Drinkhall are the type of players that everyone will be wanting to beat in order to go all the way. I’m not going into the competition with any set goals of which stage I want to reach or which specific players I want to beat, because I just want to focus on my performance – my tactics, mental preparation etc – and if I know that I have prepared, and then played, to the best of my ability, then that will be a successful tournament for me! 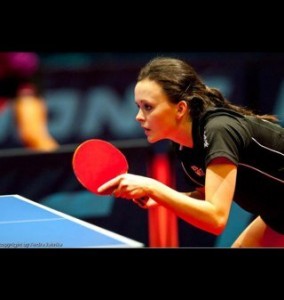 3) Will this be last tournament before the Commonwealth Games?

This is the last tournament I will play before the Commonwealth Games so it is an ideal ‘warm-up’. I have a training camp with the rest of the Welsh Commonwealth squad in the week leading up to the Sussex Open so hopefully that will be good preparation for the event. We will then continue with more training camps in the fortnight after the Sussex Open so it will be a chance to work on any issues from the tournament, in preparation for the Games. It may also be a good chance to play some of the players we may face in the Commonwealths as many of the English Commonwealth squad will be at the tournament.

4) There is a strong Welsh presence in the competition but it’s an individual event. How are these competitions different than being the in the same team with the girls?

To some extent I will still feel part of a team going to the Sussex event as I am playing alongside the girls who will be my team mates at the Commonwealths, and we will warm-up together and support each other. However, we will probably be a lot more focused on our own games and performances at Sussex, as it is an individual competition. Hopefully, if we all focus as individuals we will consequently be in good form as a team by the time we reach Glasgow.

5) BT Sports are covering the latter stages, does this give you an extra incentive to do well?

I think it great for table tennis that BT Sports are covering the latter stages  as it is not a sport that gets much media coverage. I don’t think it will be something I will be thinking about a great deal during the tournament as adding an extra incentive to try and reach those stages might make me focus too much on results rather than performance. However, it would be a great experience if I do get the chance to play a game shown on BT Sports!

Great set of detailed answers from Angharad there, we wish her the best of luck in this Open. The twins also have a blog:

I have a blog, together with my twin sister Megan who will also be going to Commonwealths – www.meganandangharad.com – where we have stories and pictures about our table tennis travels.

Between now and the Commonwealths Megan and I will will be travelling up and down from North Wales to Cardiff to train with the rest of the Welsh squad, so we’ll be very busy leading up to the Games! We’ve also been going into lots of schools recently – talking about the Commonwealth Games and trying to inspire others to take up sport.

Please have a look to see what they have got up to this summer already! Diolch i chi