Bath City Supporters had the chance to be a Roman for a day on a warm August Sunday. This was to raise money for the Big Bath City Bid with each player paying subs for the privilege to play on the famous Twerton Park.

The crowd that turned up were treated to a high scoring game by members of the Bath City board, Bid team, Supporters FC and former youth team players.

There was a slow start to the game in the first 40 minutes with fitness levels holding. Both teams were feeling out their opposition and getting used to playing with their team mates for the first time. It was the away team to strike first sprinting into a 2-0 lead at half time with two quick goals.

It was in the second half that the game really came alive. The home team must have had an inspirational team talk at half time as they came out the stronger of the two and managed to get to a 4-2 lead by the hour mark. 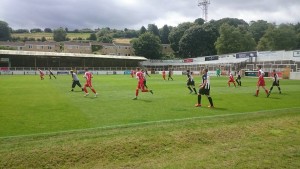 Both teams pushed on for the win with thirty minutes to play, resulting in end to end football. Substitutes were used well by each team with fresh legs changing the play. There were a further four goals in this last period but it was the home side that held their nerve and the game ended 6-4 to the boys in stripes.

Everybody who played and watched praised the organisation of the day and are keen for another outing later in the season. Here are the thoughts of the two team captains; Chris Reed for the home team and Paul Hill for the away team.

Team sheet for the day: 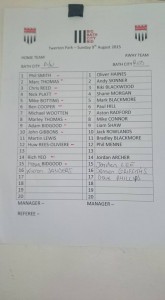 You can find out more about the Big Bath City Bid here and how to contribute in helping turning Bath City FC into a community owned club from as little as £10!