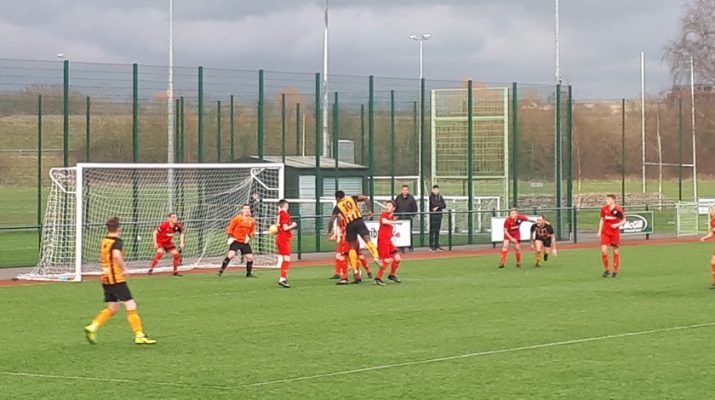 Keynsham Town are hot on the heels of Cheddar in the race for the title and profited from a goal from an unlikely source.

In the first ten minutes Matt Brown went close for Keynsham, as both teams moved the ball well to try and get a foothold in the game.

Radstock had their first good chance of the game on 16 minutes. A deep cross from the right from 7 finds 11 unmarked in the 6 yard box but the winger heads over.

Moments later Keynsham almost got lucky with a long ball which nearly caught out the Radstock keeper.

On the 28th minute there was another good chance for Radstock and another free header. This time it was 7’s corner that found 10, who misjudged his header and it sailed over.

Adrian Harvey had a half chance from a volley shortly after. Tom Kington outpaces the keeper on the edge of the box. He spots Harvey in the box but his first time shot was over.

Harvey goes on to hit the top of the bar from a Harley Purnell corner. Kington and Craig Wilson produce two low drives as the game approaches half time, with Keynsham getting stronger.

The break through comes just five minutes before half time. A ball comes in from the left hand side and finds the Matthew Martin at the back post as it evaded the Radstock defence. The full back powers it in, inside the 6 yard box to give Keynsham a 1-0 lead at half time.

First chance of the half was on 49 minutes as Radstock’s 11 forces Ash Clark  into a easy save. Then Harvey at the other end forces Radstock’s number one into conceding a corner.

Radstock almost got lucky on the hour mark with a hopeful long shot, which was saved for a corner, resulting another header over the bar. Wilson goes close for Ks shortly afterwards.

64 minutes in and Wilson sprays a ball from his own half to find Kington. He advances on the right and lays it off to Purnell but his first time shot is over.

Radstock pilled on the pressure more in the last ten minutes but Keynsham were countering well with a succession of corners.

On 83 minutes Radstock hit the post on a counter attack, and have a series of half chances but Ks stay strong to gain the win.

It wasn’t a vintage Keynsham performance but John Allen will be pleased on the whole with the amount of chances created throughout the 90 minutes. There was a welcomed return for Jordan Anstey at the back alongside Scott Saunders who marshalled the back line well throughout.

News filtered into the club house that Cheddar had also won, after being a goal down to Welton early in the game. However goals in the first and second half kept them ahead of Keynsham by one point.